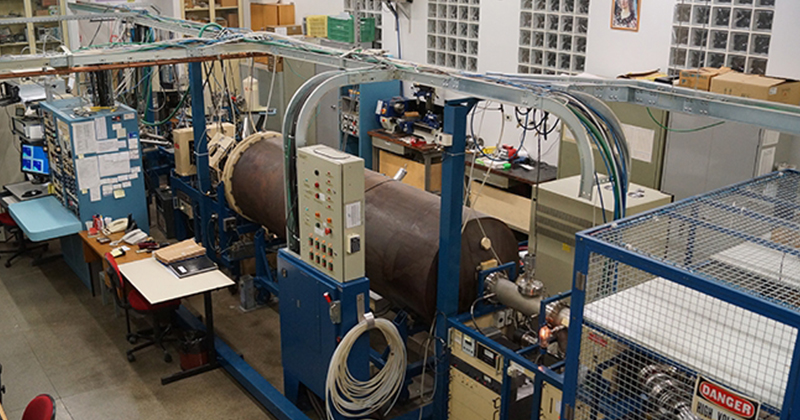 The use of particle accelerators is not restricted to fundamental research study in high-energy physics. Large-sized or even gargantuan equipment, such as the Large Hadron Collider (LHC), are employed for that purpose. However, there are also relatively small accelerators used in medicine (diagnostic imaging or cancer treatment), in industry (food sterilization, cargo scanning, electronic engineering), or in myriad investigations (oil prospecting, archaeological researching, analysis of artworks).

Whatever the objective is, controlling chaotic motion and enhancing particle flow efficiency are the goals of the scientific community devoted to this field.

A new contribution regarding that is a study conducted by Meirielen Caetano de Sousa, a post-doctoral researcher from USP’s Physics Institute (IF) and a scholarship recipient from the São Paulo Research Foundation (Fapesp), and her advisor Iberê Luiz Caldas, Full Professor at IF. The outcomes from their work have been published in the Physicsof Plasmas journal. “We conducted a theoretical study with modeling and numerical simulation, seeking to control chaotic motion in accelerators and increase the maximum velocity of accelerated particles”, Sousa told Fapesp News Agency.

The designed mechanism was based on deploying a transport barrier which confines particles and prevents them from moving from one part of the accelerator to another. Such procedure, which is yet to be implemented in ordinary accelerators, has been done in tokamaks (torus-shaped fusion devices), in which particle confinement keeps the extremely hot plasma away from the chamber walls.

“In tokamaks, a transport barrier is created by inserting electrodes in the plasma edges, which alter the magnetic field. That is yet to be done in accelerators. What has been done is adding an electrostatic wave with well-defined parameters to the system”, said Meirielen Sousa.

“As the wave interacts with the particles, it manages to control chaos but leads to multiple barriers, which do not seal the area as desired. That’s a less robust solution. In our study we modeled a system with a single barrier, similar to what happens in tokamaks”, she explained.

Such single robust barrier would be produced by applying a resonant magnetic perturbation field. As it responds to the perturbation, the plasma is confined in one single region.
“We created the model, described it mathematically, and the numerical simulations have shown it works. What now remains to be done is to advance this proposal to experimental physicists so the solution can be tested in practice”, said the researcher.

The particles are generated by an electron gun, due to different potentials between the anode and the cathode or by applying a laser pulse to the plasma. They are accelerated by successive injections of energy from electromagnetic waves. But it is precisely the interaction between the waves and particles that leads to chaos. A solution tested experimentally in accelerators is to add another wave with parameters adjusted to cancel out the chaotic process.

“We have addressed that in a previous article, published in 2012 in PhysicalReview E. That method works, but as I have said, it forms a series of multiple transport barriers which are susceptible to perturbations; and that results in a less efficient particle confinement. The one we have modeled now is a solution based on a single robust barrier, which continues to exist even in the presence of high perturbation”, said Sousa.

The transport barrier controls chaos and allows for increasing maximum particle velocity and lowering requisite velocity. For a low-amplitude wave, the simulated final velocity rose 7 percent and the initial velocity fell by 73 percent.

For a higher-amplitude wave, the behavior proved chaotic without the barrier. As the barrier was introduced, it was normalized. The final velocity rose 3 percent, and the final velocity fell by about 98 percent. That shows the main contribution from the barrier is the reduction of particle requisite velocity when they are injected in the accelerator.
“What is expected from an accelerator is that all particles arrive together at the end, without getting astray along the way, with about the same energy and velocity. If they behave chaotically, that does not take place. And the beam is of no use to any application”, said Caldas.

“Nowadays, particle emission for medical or industrial use is still largely based on the use of radioactive materials. A lot of problems arise from that, such as pollution, decay of emitting material requiring replenishment, and high cost. Accelerators avoid those problems. Radioisotope use has been partially replaced with accelerators. Hence the heightened interest in optimizing the functioning of this equipment”, said the IF professor.