Skip to content
MENUMENU
Home \ News \ Research center at USP moves towards the development of a mathematical theory of the brain
The Research, Innovation and Dissemination Center for Neuromathematics (RIDC NeuroMat) has worked to develop the new mathematics needed to construct a Theory of the Brain accounting for the experimental data gathered by neuroscience research

The Research, Innovation and Dissemination Center for Neuromathematics (RIDC NeuroMat) has worked to develop the new mathematics needed to construct a Theory of the Brain accounting for the experimental data gathered by neuroscience research 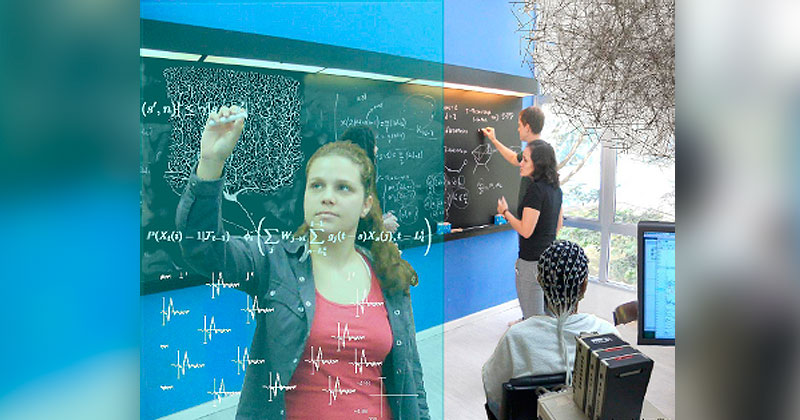 The study of the brain is probably the most important research topic of our times. An evidence of this claim is the concomitant worldwide creation of brain initiatives, including the BRAIN Initiative (USA, 2013), Human Brain Project (Europe, 2013), Brain/MINDS (Japan, 2014) and China Brain (China, 2016). FAPESP’s decision in 2013 to create the Research, Innovation and Dissemination Center for Neuromathematics (RIDC NeuroMat) spearheaded this direction of study.

The distinctive feature of NeuroMat in comparison with other initiatives is its emphasis on the development of a new mathematical framework to address the challenges raised by contemporary neurobiology. This feature goes along with the criticism that the Nobel prize laureate Edvard Moser raised against the Human Brain Project, which applies to other initiatives as well: “As I understand it, tons of data will be put into a supercomputer and this will somehow lead to a global understanding of how the brain works, but to simulate the brain, or a part of the brain, one has to start with some hypothesis about how it works. Until we at least have some well-grounded theoretical framework, building a huge simulation is putting the cart before the horse”. The goal of the RIDC NeuroMat is the development of this theoretical framework. This pioneer initiative by FAPESP’s RIDC NeuroMat puts São Paulo at the forefront of worldwide research in neuroscience.

The RIDC NeuroMat is a center of mathematics whose mission is to develop the new mathematics needed to construct a Theory of the Brain accounting for the experimental data gathered by neuroscience research. The long-term objective is to understand and explain complex neuroscientific phenomena, with focus on learning and memory. Neuromathematics is envisioned, at this time, as conjoining probability theory, statistics, and neuroscience. This requires the definition of a full new class of mathematical models to describe and explain in a parsimonious way the different scales of neural activity, their relationship and behavioral consequences. The construction of these models occurs together with the development of novel statistical and computational methods. 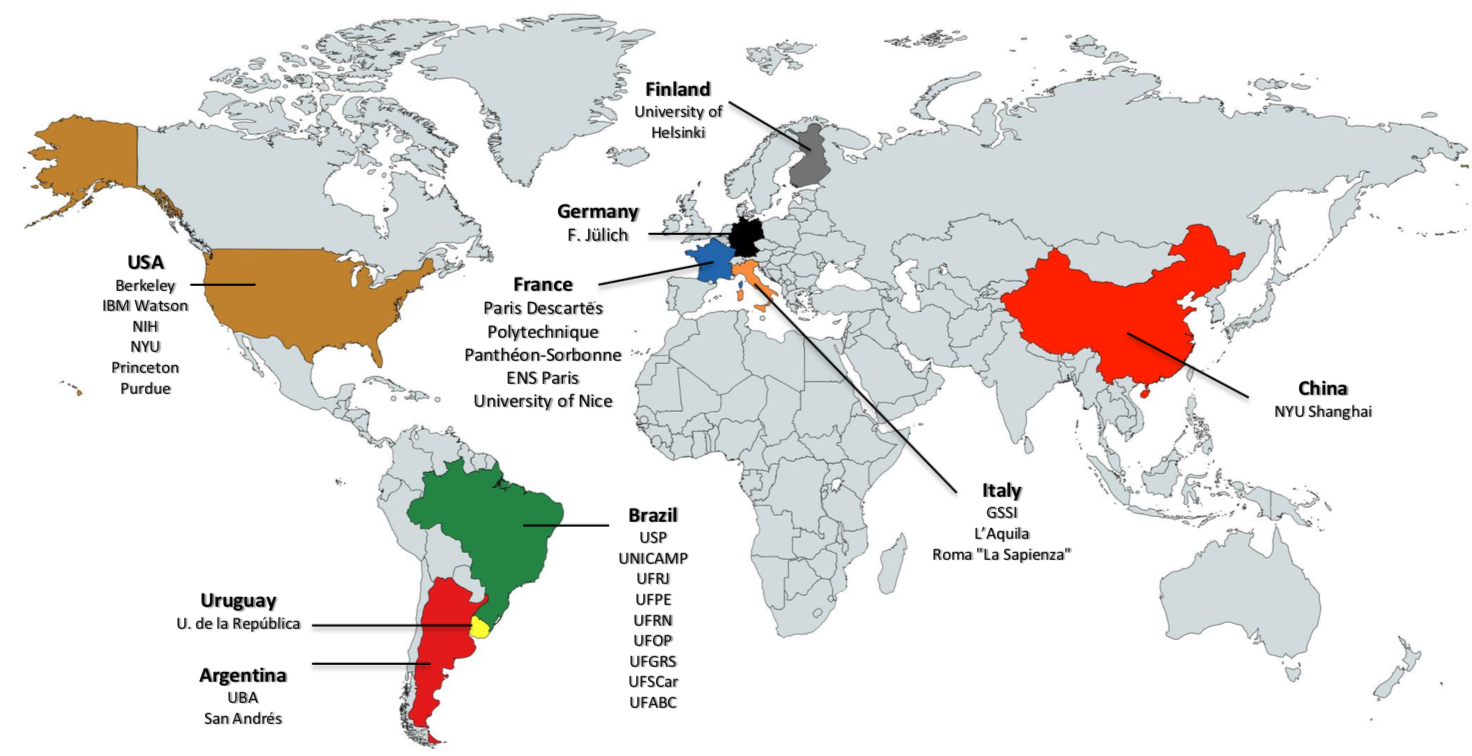 NeuroMat has fostered and leads a worldwide network (Brazil, Argentina, China, Finland, France, Germany, Italy, Uruguay, and USA) of over fifty mathematicians, neuroscientists, computational scientists, applied statisticians and clinicians. Since its inception in 2013, the NeuroMat team produced 261 articles, which have been cited 1,236 times.

The international and multidisciplinary research network built by NeuroMat was made possible within the long-term support framework provided by FAPESP’s conception of the RIDCs, aiming at cutting-edge knowledge in scientific research, innovation and dissemination. 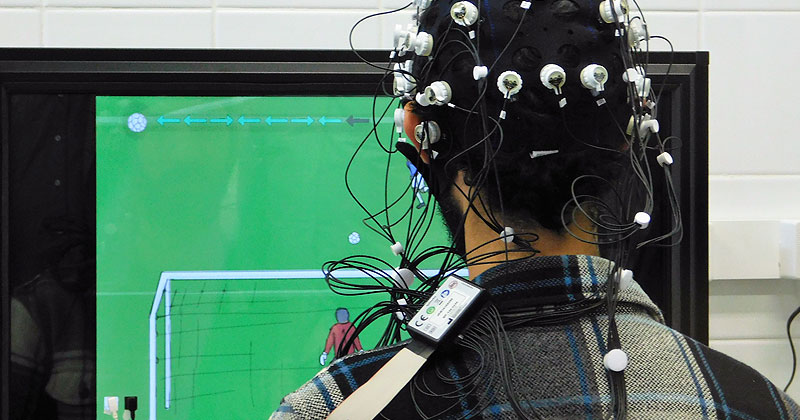 A main scientific achievement was the introduction by the NeuroMat team of a new class of stochastic processes aimed at a realistic description of nets of spiking neurons. These processes are systems with infinitely many interacting chains with memory of variable length. Since their introduction, these stochastic processes have become part of the research agenda of several centers in the world.

Our contributions to the investigation of this new class of stochastic processes include:

A second major achievement is the introduction of a new mathematical approach to address the classical conjecture that the brain retrieves statistical regularities from sequences of stimuli. This approach is based on a new class of stochastic processes, namely sequences of random objects driven by chains with memory of variable length. These processes appear as good candidates to model the relationship between sequences of stimuli and sequences of suitably parsed brain signals and behavioral states registered while exposed to stimuli.

This framework offers a new way to model structural learning and memory in the brain, including the following promising directions of research:

The innovation mission of the RIDC NeuroMat is to develop tools and applications based on the new conceptual framework to understand the brain.

NeuroMat’s activities in science dissemination use innovative means to transform scientific culture, overcoming artificial field boundaries and contributing to foment an integrated and genuinely multidisciplinary approach to the study of the brain.

Fostering a new generation of researchers

NeuroMat is strongly committed to training young researchers. The young scientists formed at the center come from different scientific backgrounds and countries. This diversity fosters a genuine multidisciplinary team and a research practice that is necessary for the development of contemporary neuroscience.

Fifty-five young researchers have been trained at NeuroMat since its inception, in 2013. The team of young researchers the RIDC NeuroMat has trained includes: 10 technical training fellows, 13 postdoctoral researchers, 18 PhD candidates, 7 Master students and 7 scientific journalism fellows. These researchers have worked on probability theory, statistics, simulations, software development, neurobiology and dissemination.