Skip to content
MENUMENU
Home \ News \ Light might recover patients with severe traumatic brain injury
The therapy is based on the application of laser, emitted by diodes integrated into a helmet, to stimulate the recovery of injured brain tissue

The therapy is based on the application of laser, emitted by diodes integrated into a helmet, to stimulate the recovery of injured brain tissue

Researchers at USP’s Medical School (FMUSP) have been developing a method to rehabilitate cognitive functions in patients with severe traumatic brain injury, victims of accidents or violence. The therapy is based on the application of laser, emitted by diodes integrated into a helmet, to promote the recovery of brain tissue.

Different therapies using light, gathered under the term  photobiomodulation, have already been applied to various health problems – from orthopedic injuries and fibromyalgia to Alzheimer’s disease and depression –, any disease in which it is intended to promote or inhibit certain cellular functions, that is, to modulate these functions. In the case of trauma, the therapy is aimed at stimulating the regeneration of injured neurons.

Light-emitting diodes (LEDs) are able to penetrate the scalp and skull, and have the potential for improving the cellular activity of compromised brain tissue. Experiments have already been performed at other research centers to test LED therapy for head trauma, with promising results. Now, the researchers at FMUSP want to take a step further by developing different approaches to maximize the positive effects of this therapy and improve patients’ quality of life.

The neurosurgeon João Gustavo dos Santos – o: Researcher’s personal fileOne of the alternatives is to initiate therapy earlier, in the acute phase of the injury. To date, such therapy has been adopted only in patients’ recovery chronic phase, that is, months after the occurrence. Neurosurgeon João Gustavo R. P. dos Santos, researcher at FMUSP explained: “Our study is part of the first experiments using the technique, initiated by Margaret Naeser, in Boston. She has begun to treat mild trauma in the late stage, six months after the trauma, to try to improve the patients’ functionality, and had good results. Then, we thought of testing how it would be in the acute phase and in severe cases.” 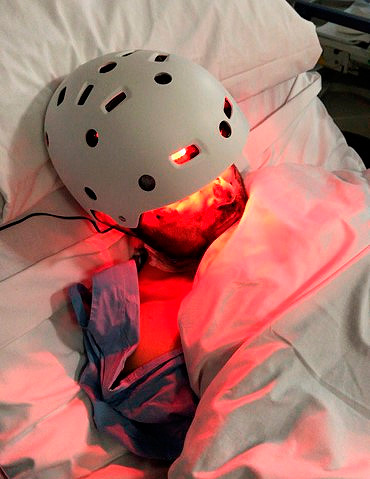 Thus, the study will examine patients who suffer severe trauma and are hospitalized within 8 hours after the accident. “This hospital admission a few hours after the trauma reduces the occurrence of events that could confuse the results,” the doctor said.

In addition, patients included in the study should exhibit symptoms of diffuse axonal injury, which is damage to the axons of the neuron within the myelin sheath (see image), resulting in a severe degeneration of the white matter of the brain. This occurs because the axons, which constitute the white matter, are the transmission channels of nerve impulses between the neurons.

Diffuse axonal injury is related to events that cause acceleration and deceleration of the skull, that is, when there is abrupt interruption of the movement of the brain, as it happens in car accidents or falls from height. In severe trauma, which leads to unconsciousness and coma and that cannot be attributed either to hematomas (accumulation of blood in the brain or between the brain and skull), or to brain cancer, it is almost certain that there is diffuse axonal injury, which is difficult to treat. “Today, in the whole medicine, we still do not have any treatment for diffuse axonal injury, which is one of the pathologies associated with traumatic brain injury. Everything which is done is literally ‘to wait and see’ how it will progress, how the body will repair itself,” the researcher said.

The treatment proposed in the clinical trial establishes 18 sessions of LED stimulation at specific points of the skull for six weeks. The idea is that patients should be evaluated for their level of consciousness before the stimulation and also after one, three and six months from the first stimulation.

Light regenerative effect was discovered by chance in an experiment with mice that aimed to treat tumors. It was realized that the laser, in fact, promoted the healing of wounds in the rodents. When investigating why this happened, later studies have shown that, at the right intensity and time, light is able to increase the oxygenation of the mitochondria, the energy power plants in the cells, accelerating the process of tissue regeneration.

To increase the reliability level of the results, the experiment is done within the double-blind, randomized and controlled methodology.

Check out how it works in the infographic below.

The preparation of the clinical trial has already resulted in four scientific articles published by the group: