Researchers from the Laboratory of Food Engineering (LEA) of the Polytechnic School (Poli) of USP are developing biodegradable packaging for food made with plant raw materials and agro-industrial residues, which serve as an alternative for conventional plastic. Works in the same laboratory go beyond and create active and smart packaging, with substances such as antioxidants and antimicrobials, which give them new uses. In one of the researches, for example, the addition of a substance from the grape skin to a packaging made with cassava starch may indicate whether the red meat or fish are already deteriorating and can no longer be consumed.

The so-called active packaging have substances capable of interacting with the food to prolong its shelf life. The smart packaging have mechanisms that enable detecting deterioration processes, temperature oscillations suffered in storage, or even indicate, by color change, if a fruit is ripe for consumption.

“One of our main challenges was developing a strong and malleable biodegradable film for packaging, which could be produced on a large scale and at a competitive price compared to petroleum-derived plastic,” says Poli professor Carmen Cecilia Tadini, Coordinator of LEA and Director of Technology Transfer at the Food Research Center (FoRC), who collaborates with the studies. “At the same time, substances with differential attributes, such as antioxidants or antimicrobials, are researched,” she adds.

The use of plant raw materials and agro-industrial residues was the path of the researchers to find a biopolymer formula capable of uniting all these advantages. One of the main promises tested at LEA is a malleable film based on cassava starch, with a substance called anthocyanin, obtained from grape skin, as additive. When used to pack meats and fish, this film changes color, from purple to blue, when the food deteriorates. “In the deterioration process, these foods release ammonia and the pH of the medium becomes more basic. When reacting to the change of pH, anthocyanin changes color,” explains the master student and food engineer Thaís Dale Vedove.

According to the LEA coordinator, this research has already overcome the main challenge to make the product viable industrially, which is preventing the raw material from degrading when exposed to the high temperatures of the extrusion process in the factories. “We are very close to solving the whole equation; we now need to stabilize the function of anthocyanin in the process and carry out the biodegradability tests,” says Tadini. “This is a disruptive innovation, because there are still no technologies that result in a malleable, 100% biodegradable, and commercially viable film,” she adds.

Another path tested by the scientists was creating a hybrid material, composed of biopolymer and traditional polymers, which would have less environmental impact when disposed. The tested formula mixes babassu starch and polypropylene. “The objective is to maintain the properties of polypropylene and make this material be partially biodegradable, reducing by 30%, 40% the discarded waste,” explains the chemist Bianca Chieregato Maniglia, researcher of FoRC and Poli, responsible for the research. “The material made with the proportions of 70% polypropylene and 30% biopolymer has already shown that it can compete with conventional plastic,” says the scientist.

For over a decade, researchers of LEA have been studying several polymer formulas to find biodegradable raw materials that can replace petroleum-derived plastic in the production of packaging and films. In recent years, research has become even more ambitious and have also begun to search for materials with differential attributes: the so-called ‘active’ and ‘smart’ packaging. The studies with packaging are funded by the São Paulo Research Foundation (FAPESP) and supported by FoRC. 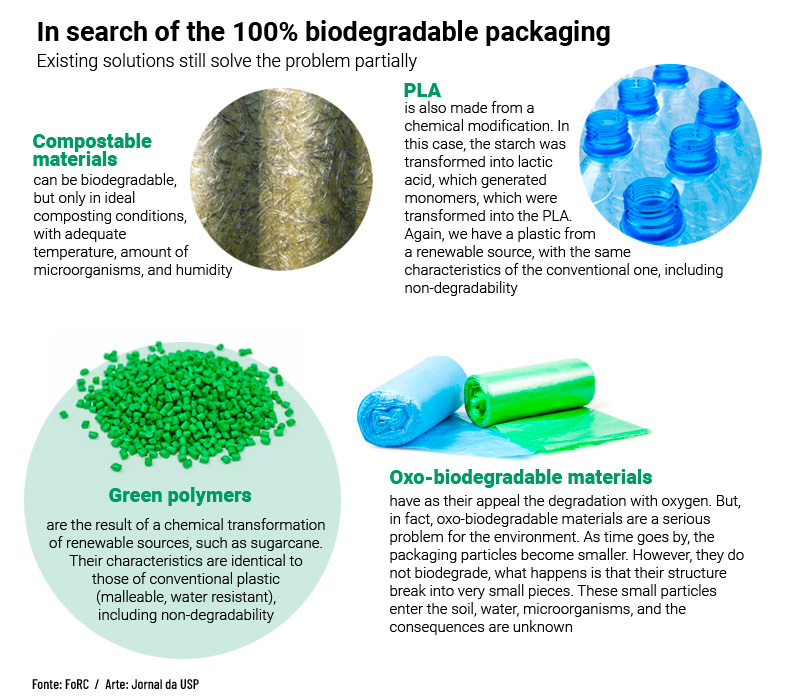 With information from the Academic Communication Agency