Skip to content
MENUMENU
Home \ News \ USP leads international project for construction of radio telescope Bingo
In addition to studying dark energy, the “diamond of Sertão” seeks to be the first radio telescope to detect, by radio, waves of the interaction between atoms and radiation at the beginning of the universe

The civil construction of the structure that will house the radio telescope will start in the coming months, with measures approaching those of a football field. Far from the metropolises and sources of electromagnetic pollution, the telescope, which is being built in São Paulo and will be installed in Serra do Urubu, Paraíba, is already called “Diamond of Sertão.”

The Bingo Project became possible thanks to the support of the São Paulo Research Foundation (FAPESP). Today, the project is also supported by the Ministry of Science, Technology, Innovation, and Communication (MCTIC) and the Funding Authority for Studies and Projects (Finep). Over the next months, the project will receive international funds from the University of Manchester, University College, ETH, and the Chinese Research Agency through the universities of Yangzhou and Jiao Tong.

“With these resources [from MCTIC], we will install the construction site, electrical connection, and a part of the necessary civil construction. Currently, we have the electrical, hydraulic, and fire projects already approved and we are waiting for environmental licensing to start the work,” says Luciano Barosi, main researcher of the Bingo Project and professor at the Federal University of Campina Grande.

Elcio Abdalla, project coordinator and professor of the Institute of Physics (IF) of USP, explains that “the impact of the project not only depends on the construction of the radio telescope, but includes the three pillars of the university by uniting research, teaching, and extension, which are not restricted to the state of São Paulo and have actions in Paraíba, as well as international partnerships.” The Bingo Project unites researchers from China, South Africa, United Kingdom, United States, Portugal, France, and Uruguay, who, together, have been thinking about solutions related to the radio telescope construction, civil construction, data collection and analysis, and teaching.

Bingo, an acronym for Baryon Acoustic Oscillations in Neutral Gas Observations, will be the first telescope designed to detect Baryon Acoustic Oscillations (BAOs) by electromagnetic waves in the radio band. BAO are waves generated by the interaction of atoms with the radiation at the beginning of the universe, and through them it will be possible to measure the distribution of neutral hydrogen at cosmological distances, using a technique called intensity mapping. Elcio Abdalla explains that it is possible to “investigate the shape and geometry of space, including its rate of expansion, if we know the apparent shape of BAO in outer space and, thus, study the dark energy. In a little more technical terms, we will be measuring the cosmological parameters governing the geometry of the universe.”

Fast Radio Bursts (FRB) are high-energy electromagnetic pulses lasting just a few milliseconds. This astrophysical phenomenon that still has an unknown origin is one of the detection objectives of the Canadian Hydrogen Intensity Mapping Experiment (Chime). The Bingo telescope will contribute to the study of FRB in the southern hemisphere.
Carlos Alexandre Wuensche, researcher at the National Institute of Space Research (Inpe) and main researcher of the Bingo Project, explains that the radio telescope will have even larger dimensions than the Radio Observatory of Itapetinga (ROI), currently the major Brazilian radio telescope. In addition to the reflective parabolas, Bingo will feature about 50 horns, which will give the telescope dimensions that can be seen from afar, making it one of the largest radio telescopes in Latin America. Wuensche celebrates: “We rely on the contribution of our international partners, especially UK researchers, but most of the construction technology is being developed here in Brazil.”
Karin Fornazier, post-doctoral student associated with Inpe and Bingo researcher, comments that “the construction of the radio telescope, by itself, is already something really impactful within the project, but the work of the researchers goes beyond that. There are several researchers, master’s and doctoral students dedicated to developing the Bingo pipeline, that is, a series of steps and software designed for the associated processes from the data collection to the data analysis of the radio telescope.”

The project proposal also includes a wide dissemination of information and education to society in general, and therefore has activities focused on Education and Scientific Dissemination (EDC). Professor Marciel Consani, of the Department of Communication and Arts of ECA, is part of the EDC team and considers that “the historical importance of the initiative lies, above all, in its potential for EDC, both in the sense of scientific dissemination and disclosure – bringing knowledge to society as a whole.” He emphasizes the interdisciplinary nature of the project, which unites physicists, astrophysicists, engineers, communicators, and educators for actions aimed at scientific dissemination and education.

At USP, the Center for Education and Communication (NCE), which has been promoting for over two decades the concept of educommunication and its practices in various social intervention projects, together with the public authorities and civil society, has also been participating in the project. Professor Claudemir Edson Viana, coordinator of NCE and of the licentiate degree in Educommunication, gives more details: “We aim to support the Bingo Project by producing material for communication and by preparing and conducting educommunication activities with the members of the educational team, as well as with the communities to be met.”

At Paraíba, the actions of Education and Scientific Dissemination started in Aguiar, city that will house the radio telescope. Luciano Barosi tells that the main idea is to use astronomy to establish and strengthen a STEAM culture, that is, focused on science, technology, engineering, arts, and mathematics. “It is certainly very difficult for someone to have a radio telescope as an object of everyday life, but this is exactly the situation of the population of Aguiar, and we wish to use the natural curiosity that the construction of the equipment causes to encourage the creation of a scientific culture in the schools of Aguiar and, possibly, the nearby cities,” explains the researcher. “These actions, for the time being, have been held in São Paulo and Paraíba, but the idea is that they spread throughout the country. For this purpose, our group has been studying new partnerships and seeking institutions that can support the expansion of our proposals,” concludes Elcio Abdalla. 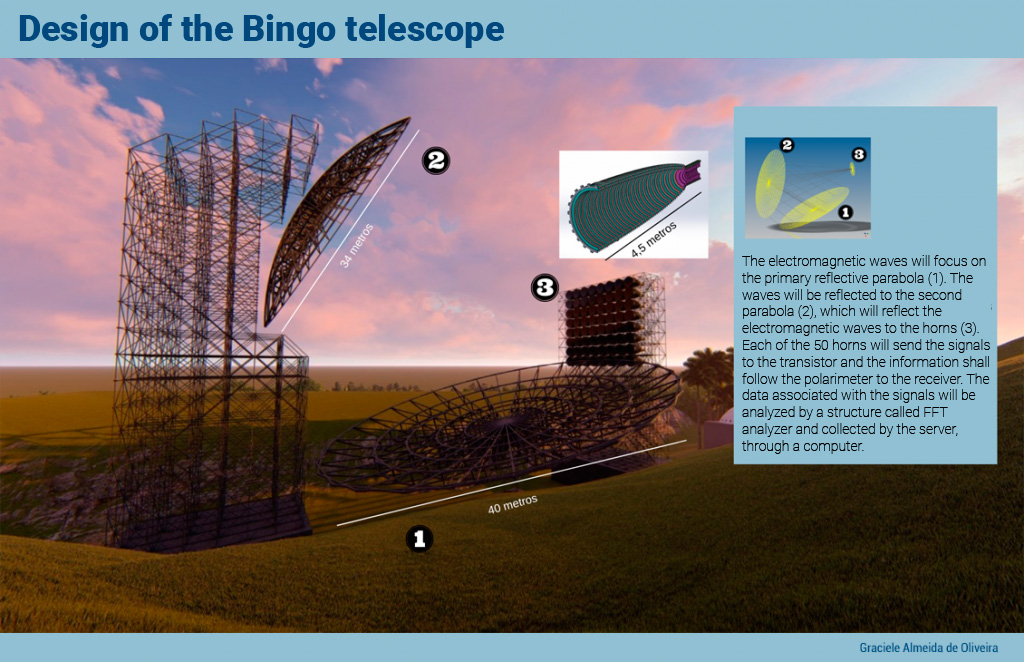