A study published in the Cancer Research journal from the American Association for Cancer Research reveals a possible therapeutic use of Zika virus, which raised world health authorities’ concern in 2015, when virus infection during pregnancy was linked to children being born with microcephaly. Now, Brazilian researchers from the Center for Human Genome and Stem Cell Studies have shown for the first time in animals the deleterious effect from injecting low concentrations of purified virus preparations into human embryonal brain tumors implanted in immunosuppressed mice. The article is titled Zika virus selectively kills aggressive human embryonal CNS tumor cells in vitro and in vivo.

“CNS tumors are solid tumors occurring mainly in children and teenagers”, explains Oswaldo Keith Okamoto, a study co-lead author. “The peak of incidence for medulloblastoma occurs among children aged 4-5. A higher incidence of AT/RT has been observed in younger children up to 2 years old.”

Tumor regression was observed in 20 of 29 animals treated with Zika virus in the study. Complete remission — total tumor clearance — twas observed in seven of them (five with AT/RT and two with medulloblastoma). In some cases, the virus has also proven effective against metastases, as it either eliminated the secondary tumor or inhibited its growth.

Mayana Zatz, a coordinator from the Center and one of the co-lead authors, does not hesitate to call the results “spectacular”. The next step is to find partners for what is called in biomedical terms Phase 1 testing, not on animals any longer, but on people; and in this case, mainly on small children. That is one of the reasons why experienced Mayana is glowing with enthusiasm, which she tries to tone down as she talks about the research she has promoted.”We are going to have to slow our anxiety down and not put the chart before the horse. It’s very important to start with two or three patients, and if it works, subsequently include a larger number.”

For that, they will need larger amounts of purified virus, produced according to good cultivation practices required for testing in humans. This phase has been undertaken together with Butantan Institute, which has already provided the viruses and cooperated with the study. From then on, they will be able to design a protocol for application in patients.
Carolini Kaid, a doctoral student from the Center for Human Genome Studies, and whose advisor is Oswaldo Okamoto, is the first author of the study. She was especially in charge of dealing with the mice: she performed the surgeries for implanting tumors, injected Zika virus into them, and then followed up on the evolution.

Ensuring the virus is safe is crucial for applying study findings to clinical practice. As regards that, the article results are promising. Concentrations of one viral particle per ten cells were sufficient to infect and kill cells derived from AT/RT and medulloblastoma tumors. Also, the virus has shown a high specificity for this type of cells.

“The virus did not infect tumor cells indiscriminately”, explains Okamoto. “It is very specific for tumor cells of the nervous system.”

Besides that, it did not infect already differentiated neurons, which is a very advantageous behavior if repeated in human with brain tumor.

Researchers also tested in vitro the functionality of viruses formed in tumor cells after infection. The results have shown these new viral particles are defective, which would prevent the virus from spreading uncontrollably throughout the patient’s body after antitumor treatment.

During the outbreak in 2015, hundreds of thousands of people were infected. Despite that, most patients, children and adults, remained asymptomatic. Only a small percentage of infected people developed serious conditions, such as Guillain-Barré syndrome or encephalitis. Such observations are very important when assessing the risks and safety of a new treatment.

“The outlook is quite positive”, says Okamoto. “But we have a path to tread before we can warrant taking it into clinical trial.” 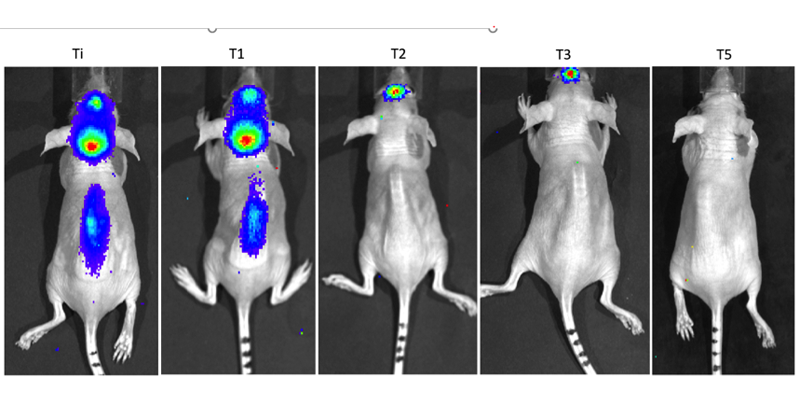 The study outcomes show Zika virus can infect and kill CNS embryonal tumors with great efficacy and specificity, both in in vitro and in mouse models. The virus was tested in cells derived from prostate, breast, and colon tumors; besides three lineages of CNS embryonal tumors, a commercial one of medulloblastoma (DAOY) and two generated by the researchers themselves, one of medulloblastoma (USP-13), and another one of AT/RT (USP-7). Concentrations of two viral particles for each tumor cell killed most CNS tumor cells, but they were little effective on other lineages. However, even lower viral amounts — of one viral particle for each ten cells — inhibited the growth of CNS tumor cells.

Virus specificity was also assessed in three-dimensional cultures, in which the effect was even more evident, as the Zika virus preference for stem cells from CNS embryonal tumors was shown to be greater than for neural progenitor cells. In in vivo experiments, CNS embryonal tumors of human origin were grafted into mice. When these animals were treated with Zika virus, most tumors remitted, and metastases shrank. Researchers were also able to relate the Zika virus effects to the Wnt molecular pathway, a pathway already described as important in the development of AT/RT and medulloblastoma.

Virus did not infect tumor cells indiscriminately in preclinical study on mice, displaying great specificity to the nervous system, or already differentiated neurons. That is a very advantageous behavior if it is proved it can be repeated in humans bearing brain tumors. In the image a MRI scan shows a medulloblastoma in a human patient, a tumor which usually occurs in children aged 4-5